The former Sports Sedans Formula Ford and Group A touring car driver is expected to receive tutelage from Jim Beam Racing’s Steven Johnson throughout the season.

The Falcon to be raced in Finance Ezi colours is currentlyÂ undergoing a freshen-up at Paul Morris Motorsports in Queensland having last raced in the Fujitsu Series at the 2009 Sydney Telstra 500 (with Hayden Pullen at the wheel).

South Australian Ian Yeing will be another new name on the grid this year driving an ex-Tom Walkinshaw Racing Holden Commodore VZ.

Yeing’s car is being prepared for the series in South Australia by THR and is best remembered for its 2002 Bob Jane T-Marts Bathurst 1000 campaign where it wasÂ handed a five-minute penalty for a pitlane fuel spill while being raced by Greg Murphy and Todd Kelly.

In other Kumho V8 Touring Car Series news 2010 series winner Tony Evangelou will make a full-time return to the class in 2012 having been absent for the majority of last season. Evangelou will race an ex-Ford Performance Racing Falcon BA.

The Kumho V8 Touring Car Series will once again be a part of the Shannons Nationals presented by Hi-Tec Oils in 2012 which kicks off at Eastern Creek on March 9-11. 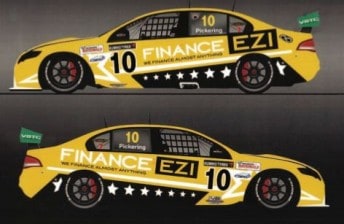 The livery for Pickering’s Falcon