THR Developments in Adelaide and Poll Performance Racing in Sydney both own cars formerly raced by Richards who passed away in December from a rare form of cancer.

The THR team have Richards’ 2003 #45 Team Dynamik Commodore VY which is probably best remembered for the popular Kiwi barrel-rolling it at Pukekohe in New Zealand that season.

It was restored last year to its original livery and will race in the same white red and black colours.

“Time is getting away from us for the first round at Eastern Creek in March but we fully intend to race the car this season” says THR Developments co-owner Nick Taddeo.

“We will keep the same livery on the car as Jason raced it it was always our intention to do that.

“Whoever ends up driving the car during the season their own sponsor will fit them around the existing livery as best as we can manage it.

“We’re waiting on a few engine parts but we’ve pulled the car down to a bare shell and want to make sure it’s 100 percent and ready to go.”

Jim Pollicina’s Poll Performance team in Sydney has the Commodore that Richards raced late in the 2006 V8 Supercars Championship for Tasman Motorsport.

The Sydney driver is returning it to the orange and black base livery it carried when it debuted that year at Symmons Plains in Tasmania.

“With the passing of JR I thought it timely as a tribute to a nice bloke” said Pollicina.

The opening round of the 2012 Kumho Tyres V8 Touring Car Series will be at Sydney’s Eastern Creek Raceway on March 9-11 as part of the Shannons Nationals. 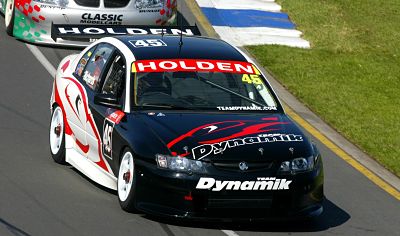