It is the very same ex-Stone Brothers Racing Ford driven by Russell Ingall in his now-infamous ‘road rage’ stoush with Mark Skaife at Eastern Creek in 2003.

Ingall also drove the car to second place in the 2004 V8 Supercars Championship completing a 1-2 result that year for Stone Brothers Racing with now-NASCAR star Marcos Ambrose crowned as champion.

The Kumho Tyres V8 Touring Car Series first held in 2008 is part of the Shannons Nationals motorsport tour and utilises Fords and Holdens formerly raced in the V8 Supercars Championship.

His father is one of Australia’s most recognised figures in motorsport.

A four-time Australian Touring Car Champion he also won the inaugural Armstrong 500 at Bathurst in 1963 the race known today as the Supercheap Auto Bathurst 1000 – as well as being a member of the V8 Supercars Hall of Fame.

The addition of Jane to the Image Racing line-up means that team principal and reigning Kumho Series Champion Terry Wyhoon will not drive in the 2012 series instead electing to focus on the progression of his expanding team.

The team which is in the final stages of completing a brand new workshop in Korumburra in southeast Victoria will prepare four cars in this year’s Kumho Series for Jane Mark Shepherd Michael Hector and Michael Bartsch. 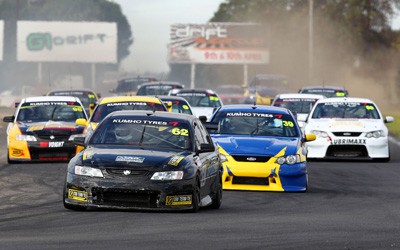