FORMER Kumho Tyres Australian V8 Touring Car Series champion Chris Smerdon has helped put his 2012 title chances back on track with victory in the second round of the series for ex-V8 Supercars at Mallala Motorsport Park.

Smerdon driving an ex-Stone Brothers Racing Falcon originally raced by James Courtney won both of todays races to seal his record sixth Kumho Series round win and second Mallala round win in a row.

The 2008 Kumho Series champion Smerdon entered the weekend last in the pointscore after a disastrous opening round at Eastern Creek in March that saw him pointless.

His Mallala success now moves him up to fourth in the series with four rounds remaining.

Jim Pollicina finished second to Smerdon for the weekend his second successive podium finish taking him to the championship lead. The Sydney driver who pilots an ex-Tasman Motorsport Commodore originally raced by the late Jason Richards now leads by 27 points over former series leader Josh Hunter who endured a terrible weekend.

Sidelined for Race 1 with fuel system issues Hunter charged from the back of the grid to second in Race 2 only for his car to fail on the last lap. He again charged from the rear of the field in the 20-lap final eventually finishing third after contact with Michael Bartsch at the turn five hairpin on lap 16.

South Australian Bartsch had been on target for a podium finish until the contact. The subsequent spin dropped him to eighth in the race and fifth for the round.

Just nine cars finished from the 17 that started Race 3 though the most fortunate was Aaron Tebb who survived a high-speed off-track excursion at the end of the back straight.

He was unhurt and his car relatively undamaged though the accident brought out the Safety Car and set up a five-lap dash to the finish for the remaining cars.

Earlier in the day Saturdays Race 1 winner Mark Shepherd leapt away to a solid lead in Race 2 of the round and looked on target to seal another victory until his engine blew. The damage was enough to sideline the Wangaratta-based driver from the final race.

Television coverage of the round will air in upcoming weeks on Speedweek on SBS and Inside SPEED on Foxs SPEED motorsport channel.

A dedicated one-hour telecast of the round will also air on SPEED at a later date.

The next round of the Kumho Tyres Australian V8 Touring Car Series will be at Winton Motor Raceway in Victoria on June 23/24 as part of the Shannons Nationals.

TOP 10 CHAMPIONSHIP POINTS AFTER ROUND 2 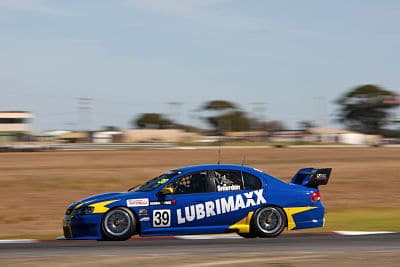