The V8 Touring Car Series has been in operation since 2008 and has the blessing of V8 Supercars as a home for cars that have finished their competitive racing life in the Dunlop Series.

Competitors will be encouraged to present their cars in original liveries with older model Commodores (VP VR VS VT VX) and Falcons (EB EF EL AU) all eligible.

Competitors must use the V8TC control tyre on Saturday and Sunday (tyres are open in Friday private practice) and must also use a H-pattern gearbox rather than a sequential.

Eligible cars must have a CAMS logbook either a current V8 Supercar V8 Touring Car or Sports Sedan logbook is acceptable.

Ingwersen owns and drives an ex-Castrol Perkins Commodore VT which won the 1998 Sandown 500 in the hands of Larry Perkins and Russell Ingall and was driven to second in the V8 Supercars Championship by Ingall in late 1998 and 1999.

He has restored the car and continues to race it in its Castrol Perkins livery.

Organisers have confirmed the event format with three optional 20-minute practice sessions on Friday a practice and qualifying session on Saturday with three races over Saturday and Sunday to complete the weekend. 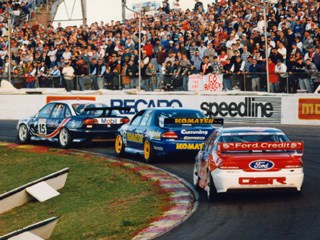 Old School: Greg Murphy heads Alan Jones and Glenn Seton at Oran Park in 1997. Cars from the era are eligible for an event in October at Wakefield Park.