Bright drove the car to win the inaugural round at the Bahrain International Circuit in late-2006 and had his final drive with FPR in the car at Phillip Island at the end of that season.

The car was last raced in the V8 Supercars Championship in 2008 by Marcus Marshall for Brights own team Britek Motorsport and lay idle until it returned to the track in June with Evangelou winning a race in Round 3 of the Kumho Series at Winton.

â€œIts come up a real treat. It has every original sticker and we were able to get it pretty much right on the money said Evangelou.

â€œPeter Brown from Mr B Screenprinting does a lot of the stickers for the V8 Supercars teams and he had the logos and other decals all 58 of them we needed. Hes traced every single one and its back to how it used to be it looks great.

â€œIts an important car in the history of FPR. Bright won in Bahrain with it and drove it for most of the 2006 season. He won a race at Winton in it and took a few pole positions as well.

The team is also aiming to regain the #6 plate from another squad within the V8 Touring Car paddock.

Its the same number Bright carried on the car when he raced it in 2006 for FPR and Evangelou also used the number when he won the Kumho Series in 2010.

The next round of the Kumho Tyres Australian V8 Touring Car Series will be at Phillip Island as part of the Shannons Nationals on September 22-23. 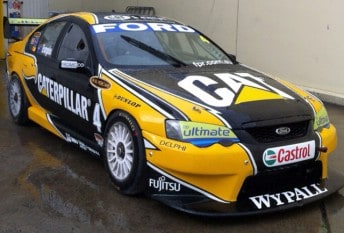