A post-race Pit Lane Penalty was applied to Haber for a separate incident with Nathan Assaillit elevating Garioch to 10th place thus earning him two extra points – enough to give him the round victory over rookie Shae Davies.

Davies won Race 3 after launching a last lap pass on Wyhoon and claimed second for the round for Fernandez Motorsport with Lubrimaxx driver Wyhoon third for the weekend.

However in a day full of drama round winner Garioch was given a 10-championship point penalty (taken from his overall tally rather than his round result) for contact on the first lap of Race 3 with Tony Evangelou.

The penalty thus moves Davies into the series lead heading to round two at Mallala in April.

Returning former Kumho Series champion Chris Smerdon took advantage of the dramatic last lap in Race 3 to finish second in the race and fourth overall for the weekend.

Matt Hansens ex-Mark Skaife Holden Racing Team Commodore was seventh for the round clear of Tony Evangelou Nathan Assaillit (who retired from Race 3 after the contact with Haber and had earlier received a mechanical black flag for a loose passengers window) and Jim Pollicina.

2012 Kumho Series runner-up Pollicina had a terrible weekend contact with Shae Davies in Race 1 and Ambrosio in Race 2 only tempered by a sixth place in Race 3.

Television coverage of todays Kumho Series round will air on SBS Speedweek on Sunday April 7 at 2.00pm and on SPEED on Foxtel at a later date.

The next round of the Kumho Tyres Australian V8 Touring Car Series will be held at Mallala Motorsport Park in South Australia on April 20-21.

KUMHO SERIES POINTS AFTER ROUND 1 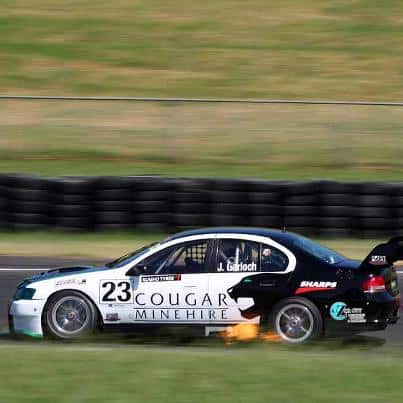