WYHOON TAKES MALLALA ROUND AND MOVES WITHIN POINT OF SERIES LEAD

Matt Hansen rounded out the podium yesterdays Race 1 winner overcoming a spin in Race 3 to climb back up the field and earn enough points to claim third for the weekend.

He was also involved in some drama in Race 2 after making contact with Tony Evangelou that spun the latters ex-Ford Performance Racing Falcon. His sold weekend moves him up to third place in the pointscore.

Evangelous CAT Falcon finished third in the final race and fourth overall for the weekend while the top 10 for the round was completed by Chris Smerdon Steve Briffa Chris Delfsma Michael Bartsch Jim Pollicina and local rookie Josh Kean.

Briffa did however manage to find a strange way to finish Race 2 after spinning at the last corner he rolled backwards over the line to finish the race!

It was a miserable day for 2012 series runner-up Pollicina. The Sydneysider crashed in Race 2 after his foot slipped off the brake at a restart before accident damage sidelined him from Race 3.

Television coverage of todays Kumho Series round will air on SBS Speedweek at 2.00pm on Sunday April 28 and on SPEED on Foxtel at a later date.

The next round of the Kumho Tyres Australian V8 Touring Car Series will be held at Winton Motor Raceway in Victoria on June 22-23. 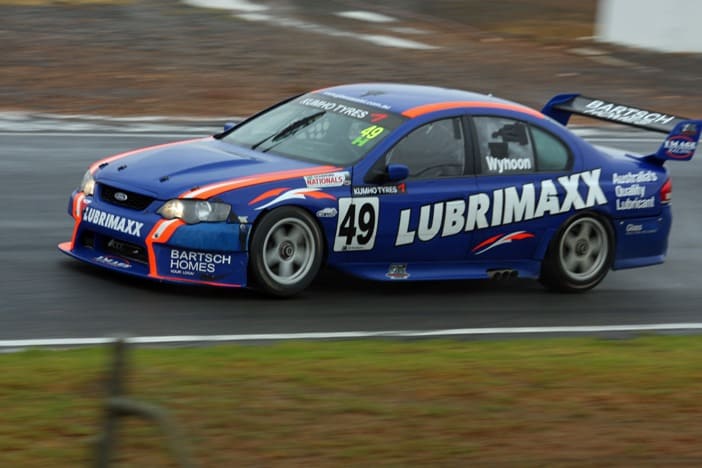