The car is well-known in V8 Supercar history its the same Commodore the late Jason Richards barrel-rolled at Queensland Raceway in 2005 and then drove alongside Jamie Whincup to finish third in that years Sandown 500 and runner-up at Bathurst.

Richards used the car to win his first and only V8 Supercars Championship race at Winton in 2006 before it was run in the Development Series by Dale Wood with Greg Murphy Racing in 2007 and 2008.

Ironically Walter was teammates with Wood at GMR in 2007 and 2008 and at the time drove the car now used by Pollicina in the Kumho Series!

The ex-Richards Bathurst runner-up chassis has been recently purchased by Pollicina and returned to the east coast from Perth. It will run a H-pattern gearbox at Winton in a fortnights time.

â€œI need to do more racing because I havent done anything in over three years so Ive got to get back into it. Its better to be racing with other guys than testing on old tyres and driving around and around by yourself.

â€œTheres some big gaps in the Development Series calendar so its a good way to stay sharp in the meantime before the next round in Townsville in July.

Walter is no stranger to the Kumho Series either. He competed in an ex-Tasman Commodore at Eastern Creek in 2010 and won a race in the one-off appearance. 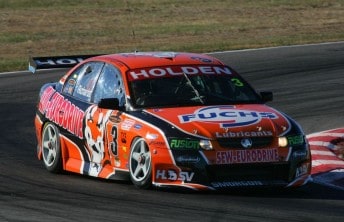