CLEAN SWEEP FOR SIMPSON AND SONIC

His victory also means that four different drivers have won the first four rounds of the Kumho Series the first time in the categorys six-year history that this has occurred.

â€œWe were disappointed with how things went at Winton so we were keen to keep the speed we had there rolling into Queensland said Simpson.

â€œIts great to get the clean sweep so wed hope we can carry that to Phillip Island now and keep aiming for some more race wins.

Despite missing the first two rounds at Sydney Motorsport Park and Mallala Simpson has now moved to sixth in the series pointscore and claimed todays round victory over 2012 Queensland Raceway round winner Morgan Haber.

The Mackay-based driver finished second in Race 2 earlier today though was penalised five seconds post-race for jumping the start and thus dropped to third position behind Shae Davies.

He was able to get back in front of Davies in Race 3 after dropping the position early in the race the pass allowing Haber to claim second for the round with Davies rounding out the podium.

Despite still not winning a round Davies has built his series lead to 82 points after main rivals Terry Wyhoon and Tony Evangelou were involved in an accident in yesterdays opening race.

Wyhoon clawed through the field to finish eighth and sixth in todays two races to finish seventh overall while Evangelous ex-CAT Falcon suffered clutch problems in the final race and he now has drifted 102 points behind Davies.

Toowoomba racer Nathan Assaillit rounded out a solid weekend of racing to finish a personal best fourth for the round ahead of Matt Hansens ex-Mark Skaife Holden Racing Team Commodore.

The top 10 for the round was completed by Dan Day (a personal best in sixth) Wyhoon debutante Jordan Skinner Finance Ezis Maurie Pickering and Steve Briffa who failed to finish Race 3.

Matthew White had looked a podium contender after a strong run on Saturday though his ex-Ford Performance Racing Falcon continued to be struck down by a mysterious engine problem. He finished a delayed 19th in Race 2 and elected not to start Race 3 due to the engine dramas.

Television coverage of this weekends Kumho Series round will air in upcoming weeks on SBS Speedweek and on SPEED on Foxtel at a later date.

The penultimate round of the Kumho Tyres Australian V8 Touring Car Series will be held at Phillip Island on September 21-22.

KUMHO SERIES POINTS AFTER ROUND 4 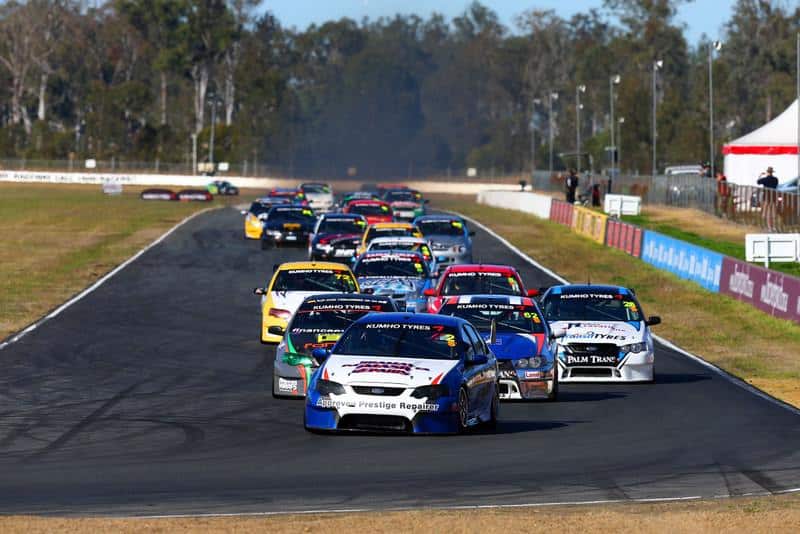