Despite missing the opening two rounds at Sydney Motorsport Park and Mallala Simpson now sits fourth in the series and is within six points of third-placed Tony Evangelou.

Davies won the tiebreaker with White as a result of his better result in Race 3 and retains a 96-point advantage over Terry Wyhoon heading into the last round at Sandown in November.

â€œWe were a little bit stuck with tyres because we had flat-spotted two of them said Simpson postround.

â€œWe had no pace in Race 2 earlier today but I really enjoyed the last race with Shae. If we could finish anywhere in the top three in the series points after missing the first two rounds that would be a great result.

It was a day of drama in the Kumho Series after White the V8 Supercar Development Series team owner who made his Kumho Series debut in the last round won Race 2 on the road.

However he was adjudged to have jumped the start and given a post-race five-second penalty added to his race time.

Davies crossed the line second on the road but was also given a five-second post-race penalty for not being correctly aligned in his grid box at the start of the race.

That elevated Simpson who crossed the line third to the race victory and thus keep his streak alive. White was classified second from Davies and Wyhoon with Matt Hansen and Evangelou (who recovered from clutch problems on the line) next.

Simpson the former New South Wales State Formula Ford champion then went on to win Race 3 after Davies put up a challenge in the early laps.

The Fernandez Motorsport Falcon driver did manage to pass Simpson for the lead though did so under yellow flags. He redressed the situation and moved over to allow Simpson to take back the lead which he held to the finish.

â€œIt was just in a bad spot because of the sunlight so the guys let me know on the radio and I moved over. It was no big deal said Davies.

White was forced to charge back through the field after stalling on the grid in Race 3. He was fortunate that the rest of the pack managed to miss his ex-Mark Winterbottom Falcon while it sat stationary.

Toowoomba racer Nathan Assaillit was on target for another solid round result though a broken suspension upright at the high-speed turn one put him out of fourth place in Race 2.

The damage to his Falcon was enough to sideline him for the final race.

Television coverage of this weekends Kumho Series round will air on SBS Speedweek on Sunday October 6 and on SPEED on Foxtel at a later date.

The final round of the Kumho Tyres Australian V8 Touring Car Series will be held at Sandown on November 16-17.

KUMHO SERIES POINTS AFTER ROUND 5 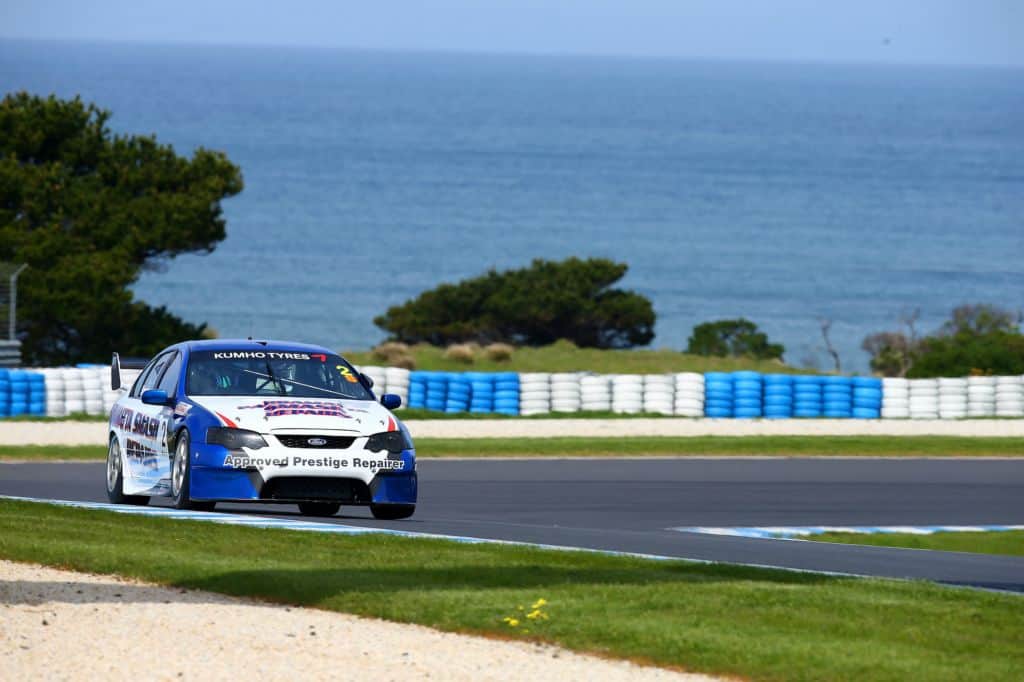