“I didnt expect it and I knew Ryan (Simpson) would be very quick and a big challenge said McConville whose win ended an eight-race streak from Simpson.

â€œI was conscious of not getting in the way of the guys fighting for the title. The Eggleston Motorsport Commodore hooked up on about lap four or five when the front gripped up and it was all coming back to me.

â€œI made some bar changes that I remembered making back in the VZ days in V8 Supercars and they worked. Its a big credit to Ben Eggleston and Rachael Wagg for letting me have a steer.

â€œI hope for the categories sake they can get more cars out because its a great series for guys who want to move on to Development Series or V8 Supercars added McConville.

â€œIf you can do 33s or 34s in one of these things around here you can drive anything. 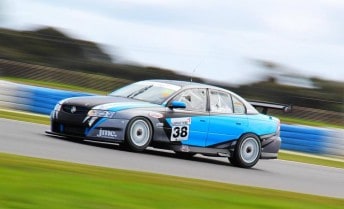