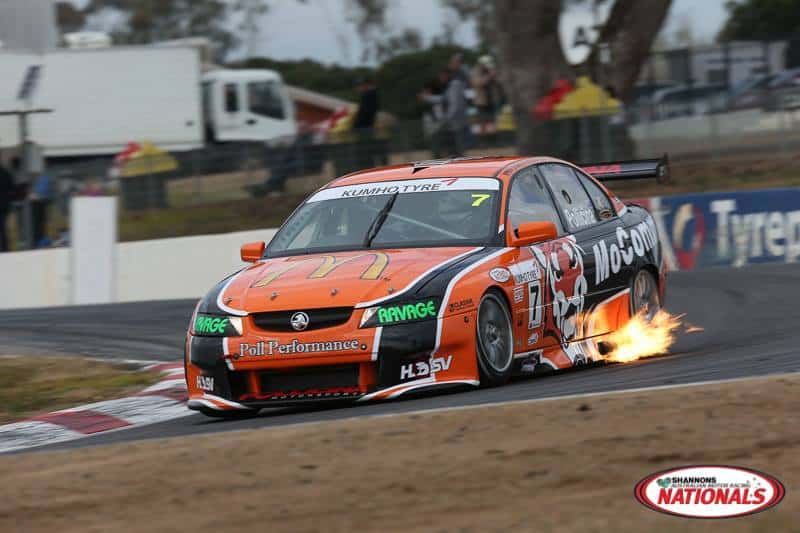 Loscialpo and Pollicina were Production Car teammates in the mid-2000s and will reunite this year in a pair of Holdens that will sport the Sprint Gas livery run by Tasman in 2008.

According to V8Sleuth.com.au one car (TMS 002) finished second at Bathurst in 2008 at the hands of Jason Richards and Greg Murphy while the other (TMS 003) never raced in the main game but had some success in the Development Series prior to being sold to its current owner.

The Sydney driver says hes excited to be building his team for the 2016 season.

â€œI purchased a couple of VEs in 2012 from Tasman Motorsport and Ive been sitting on them since Pollicina said.

â€œI raced one car (TMS 002) – that finished second at Bathurst in 2008 in the Development series in 2013 and last drive it in the Bathurst 12 Hour support races this February. The car seemed strong at Bathurst.

â€œRecently I also acquired TMS 003 which was built in 2009 as a spare shell but never actually ran in the main game. It raced in the DVS and is a fairly new car. Its only done 14 rounds and still has that new car smell!

â€œHaving two identical cars will allow us to consolidate the spares package.

Loscialpo who has plentiful experience in Production Car and Improved Production racing will sample V8 Touring Car power for the first time this week ahead of his debut at Sandown on April 1-3.

â€œAnthony and I ran Production Cars together in the GT Performance days in 2007 and weve been friends since. Its great to have the opportunity to do something with him this year Pollicina explained.

â€œHes testing my old Tasman car (VZ) to get head around the car things like the gearbox and brakes. His first round will be at Sandown. Hell lack experience but in a short amount of time will start to mix it with the guys and should be able to fight in the second half of the season.

â€œOur expectations are that we want to be able to win the Privateers class and potentially fight for the outright championship.

Pollicina said he expects the VE Commodore to be a step up in performance when compared to his existing ex-Tasman VZ Holden and that recent rules tweaks in the category will also help his cause for outright success.

â€œIt seems a better package under acceleration and brakes he said. â€œWeve been running against BF Falcons in older generation cars so evening it up will be good. Everyone is on the same page.

â€œThe Tasman cars are very strong and even though they were an underfunded team they performed well against the opposition of the time. The cars are strong and fast enough to do the job.

â€œThe change to a 7500rpm rev limit will also play to the strengths of our cars.

The opening round of the Kumho V8 Touring Car Series will be held at Sandown Raceway in Melbourne on April 1-3.

Nicknamed Rachel after Kiwi model Rachel Hunter because the mechanics and the driver were all Kiwis TMS 002 was debuted by the late Jason Richards in the 2008 season and with Greg Murphy ultimately finished second at the Bathurst 1000.

Jason Bargwanna drove the car in the 2009 season where he scored a shock pole on the Gold Coast and contended at Bathurst prior to a late-race spin.

After Tasman closed its doors at the end of that season the car won the 2010 V8 Supercars Development Series with Steve Owen behind the wheel running for Greg Murphy Racing. GMR retained the car for the next two seasons before Pollicina purchased it to utilise in DVS in 2013. The car last raced in late 2014 and will return to the track this year in the Kumho V8 Touring Car Series.

The third VE built by Tasman Manufacturing in 2008 the car never raced in the main game and instead served as a spare chassis through the 08 and 2009 seasons.

Although V8 Supercar Development Series regulations prohibited brand-new cars from running in the series special dispensation was granted to Greg Murphy Racing to enter the car once Tasman shut its doors in 2010.

The car was a race winner in the hands of Dale Wood (2012) however sat idle in 2013 and 2014 before being placed for sale. Pollicina purchased the car earlier this year for in anticipation for a Kumho series debut.