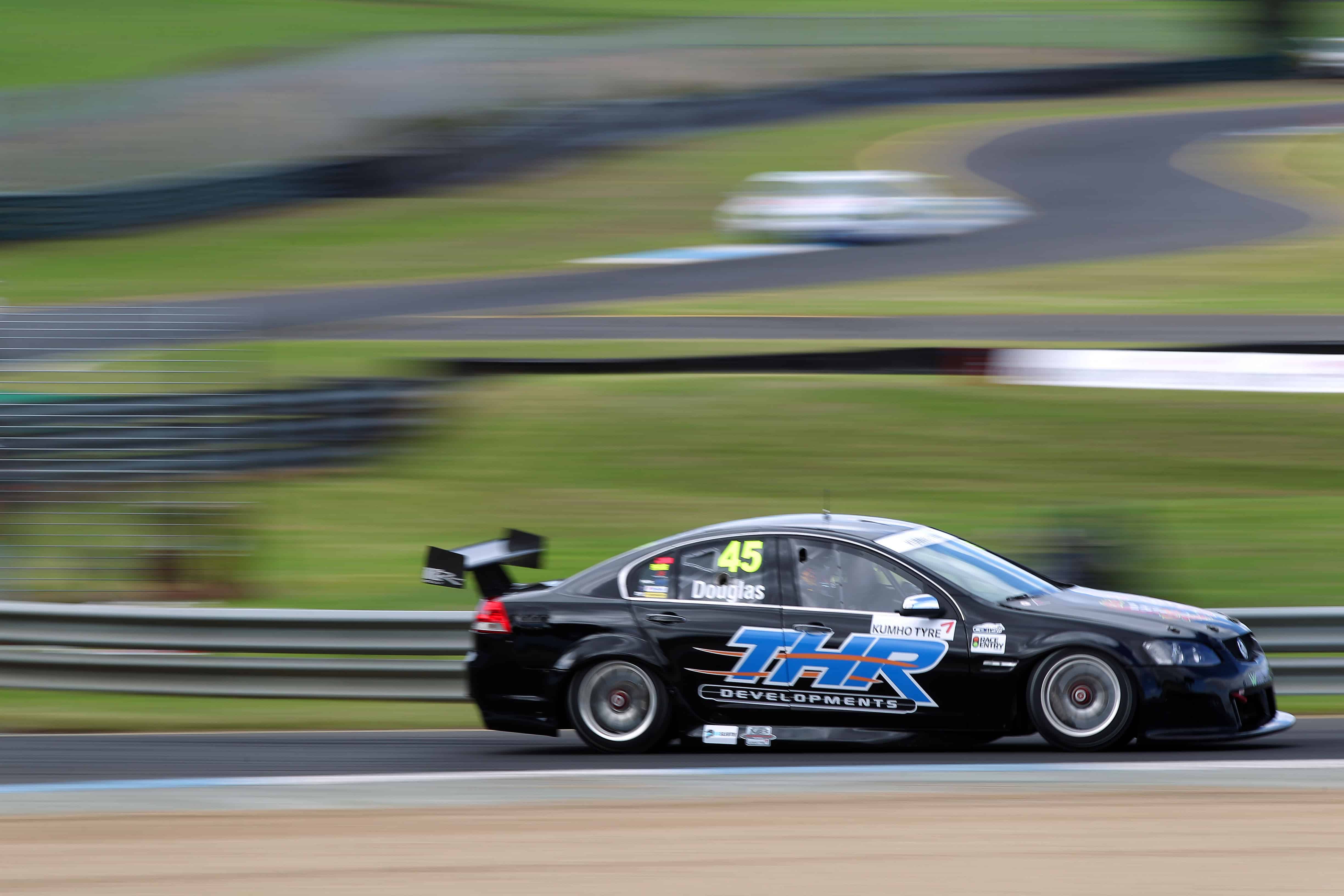 Race officials had originally declared the race a non-result however further assessment overnight saw them revise their decision and allocate half points with results based at the end of the fifth lap.

His two victories on Sunday didnt come easy either the former Bathurst 1000 runner-up twice having to pass rivals for the lead before being able to secure the victory.

â€œWe got off to a good start of the year and the boys from Adelaide gave me a good car Douglas said.

â€œWe have a few dramas off the start line! Its a cracking pace out there with Tyler and Bryce pushing me the while way and later on in the year I reckon theyll be pushing me even more. Its going to be a good year.

Douglas path to victory came despite a flying start from Jim Pollicina – one that saw him jump from sixth to the lead in race two. It took five laps before he was ultimately hunted down and passed by Douglas Bryce Fullwood and Tyler Greenbury.

Douglas then battled with that same pair in race three before working his way to the front at half-race distance.

The round victory came on Douglas debut in the Kumho series and was the first race wins for the THR Developments squad since Chris Smerdon won at Mallala in 2012.

â€œIts been awesome for me to learn off someone like Taz the calibre of driver that he is Fullwood said.

â€œIm learning a lot and Id really like to thank Matt White and his team. They gave me an awesome car and theyve done a lot of development on it which has really stepped the car up.

Brad Jones Racings rookie Josh Smith had a challenging debut to the world of V8 racing the reversal of results in race one ultimately costing the youngster from Townsville.

After ending the first race beached in the gravel Smith was set to start from pole where he qualified for race two before officials in race control elected to classify the race.

As a result he started race two from the back of the field storming to 7th at the end of 12 laps.

That improved further to a strong fifth by the end of race three to end the weekend eighth overall and with a pole position to his credit.

Jim Pollicinas privateer class win backed up his victory in the class title last year the Sydney driver grabbing finishes of fifth fourth and sixth across the three races to kick off his 2016 campaign in style.

Steve Briffa finished second in the privateer class with Jason Heck third in his ex-FPR Falcon.

The close confines of Sandown caught several people out throughout the weekend: Sam Morabito and Michael Anderson two to suffer damage in the final race of the weekend.

Morabito stopped with significant frontal damage to his VE Commodore exiting turn four bringing out the Safety Car and bunching up the field for a one lap dash to the flag.

On her Kumho series debut Emily Duggan had a challenging weekend after failing to finish races one and two however that turned around in the finale with the V8 first-timer showing significant improvement to finish 11th and in front of several experienced campaigners.

The next round of the Kumho V8 Touring Car Series will be contested at Winton Motor Raceway with the V8 Supercars on May 20-22.

Highlights of the opening round will be broadcast on SBS Speedweek in coming weeks check the V8 Touring Cars website for details.

CHAMPIONSHIP POINTS After 1 of 5 rounds.