CRITICAL ROUND IN KUMHO SERIES CHASE 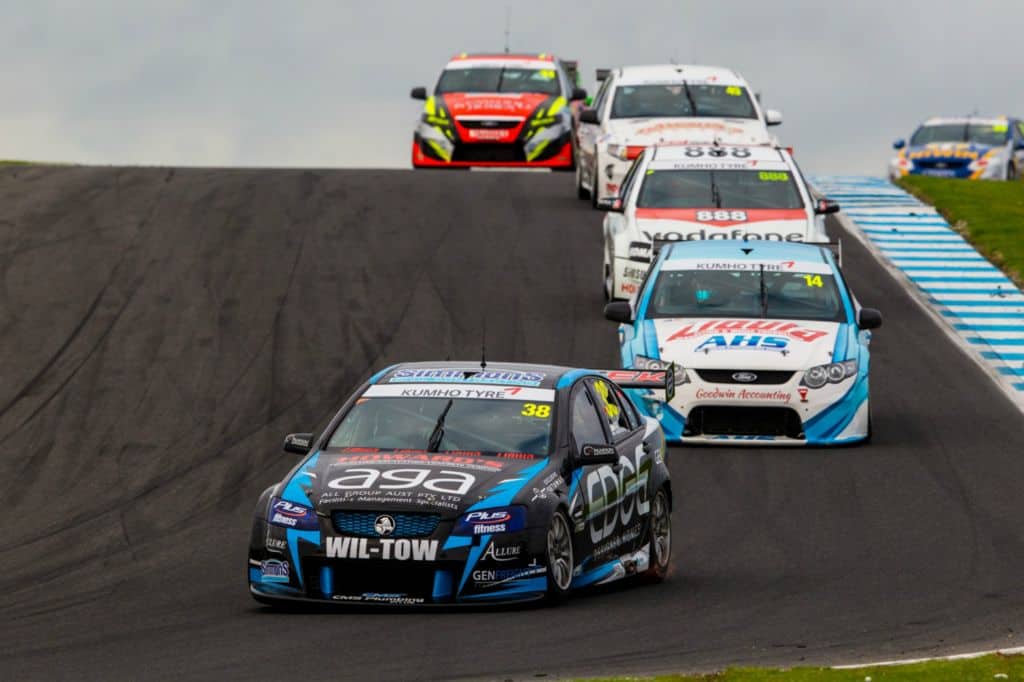 While Brad Jones Racings Jack Smith leads the series by 99 points heading into the penultimate round the Phillip Island Grand Prix circuit will see his two nearest rivals putting on as much pressure as possible to keep the title alive into Sydneys season finale this October.

Smith was imperious last time out at Queensland Raceway scoring pole and three race victories in Queensland to emphatically put his mark on the Kumho Series title chase.

It was the first clean-sweep of the season and Smiths second round victory in a row following earlier success at Winton.

Jordon Boys sits second in the championship but won the series opener held at Phillip Island in April earlier this year.

Taking advantage of a puncture on race leaders Tyler Greenburys Eggleston Motorsport Commodore Boys powered his Image Racing BF Falcon to victory in the third race of that round doing enough to take the weekend by a solitary point.

Boys then finished third at Winton and fifth at Queensland to retain second in the standings with two rounds remaining.

Greenbury has been one of the hard-luck stories of the season winning four races this year but losing two rounds almost within sight of the chequered flag including at the season opener.

A strong consistent weekend at Queensland Raceway saw the young Queenslander grab third overall in the Sunshine state and his earlier form at the Island will give him hope for another strong weekend this time around.

Michael Anderson sits fourth in the championship the impressive Bathurst-based driver now a regular frontrunner following his upgrade to an ex-FPR BF Falcon at the start of the season.

Andersons relationship with his new car got off to the best possible start when he scored his maiden Kumho Series pole at Phillip Island earlier this year taking advantage of a drying track and a perfectly-timed lap to grab the top spot.

Hes also in the thick of a close battle for the Kumho Cup class honours this year with fellow privateer runner Jon McCorkindale.

Though the driver from country New South Wales endured a torrid time last time out in Queensland he trails Anderson by only 64 points with plenty of racing to come while two fourths at the Phillip Island season opener will give cause for optimism as well.

Jordon Boys Image Racing teammate Josh Smith was another to enjoy a strong weekend the last time the series raced at Phillip Island improving from 11th in qualifying to finish sixth in race one and a stunning second in race two to kickstart his season in style.

A consistent run since then has him within striking distance of the titles top three heading into the final two rounds.

Outside of the key title protagonists the Phillip Island field includes plenty of familiar faces.

After spending much of their weekend in Queensland racing wheel-to-wheel Michael Caine (ex-Tasman VE Holden) and Chris Smerdon (ex-SBR FG Falcon) will continue their battle at Phillip Island while Caines teammate Jim Pollicina will be looking to bounce back from a tough trip to the sunshine state to enable his chase of a top-six finish in the championship to continue.

Steven Page Leigh Moran and Garry Hills all return to the series while noted Victorian racer Gary Collins will make his second start of the 2017 season in his stunning ex-Jack Daniels Racing / Kelly Racing Commodore.

The Kumho Tyre V8 Touring Car series grid will tackle three races this weekend with the two on Sunday to be streamed live via the Shannons Nationals live stream available at thenationals.com.au.