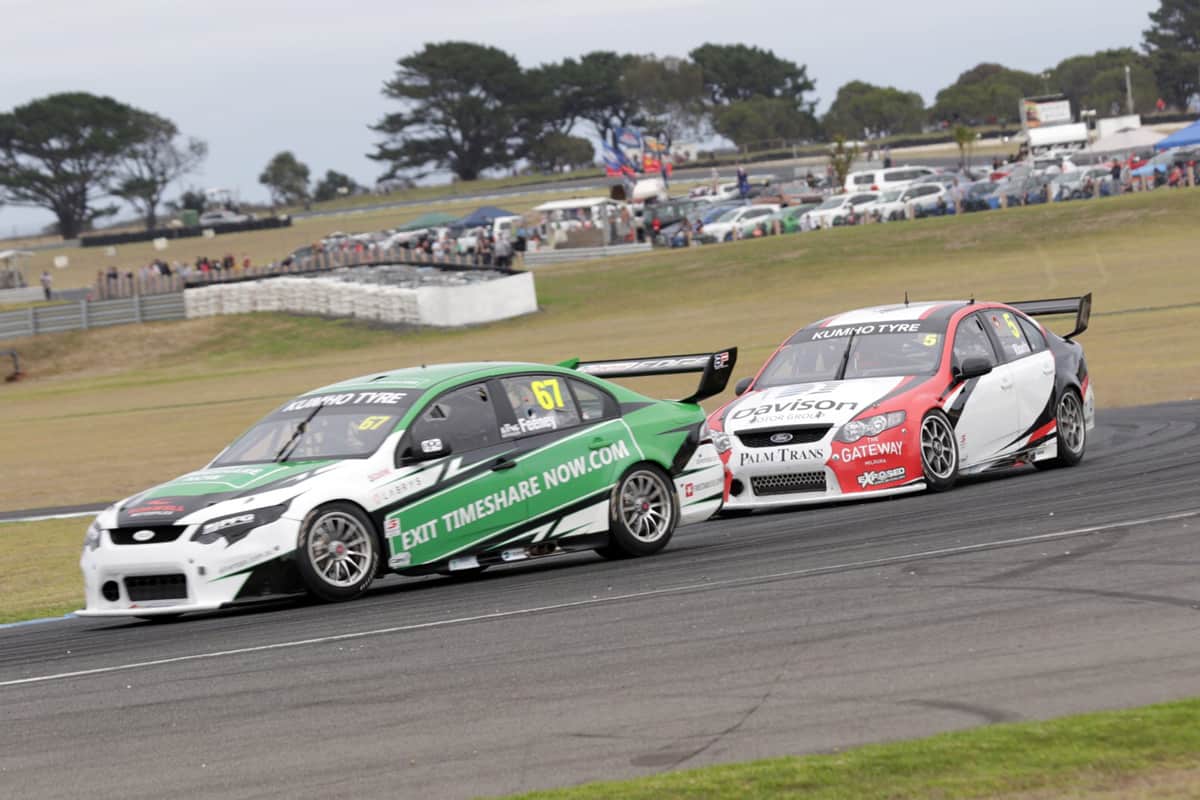 “That was a very tough race” said Feeney who earlier in the day took pole position in what was a very compelling and hotly contested qualifying session.

“I am over the moon with how that race went it was a great contest and full credit to Hamish he drove really well.”

Ribarits had the better jump at the start in the Matt White Motorsport former Ford Performance Racing FG in which he shared the front row for the start.

“I actually had a great jump where the others seemed to me to bog down but then I had wheel spin in the second phase.

“It was a really good race but I just couldnt get past him (Feeney)” he confided.

Shadowing them in the early part of the race was Ribarits team mate Zac Best. However from lap four onwards the car had a front-end vibration. That was a tyre drama which turned into a blow-out as he crossed the finish line in third place.

After a poor start where he dropped from third to sixth Jayden Ojeda (Anderson Motorsport ex-FPR FG) fought back to fourth in front of Nic Carroll (MWM FG).

Matt Powers (Aussie Driver Search FG) put out the challenge to Carroll over the last lap but ran off the track at Siberia and the challenge was over. Behind them came Jon McCorkindale (FG) and Matt McLean (Image Racing FG) who was taking part in his first car race after a successful karting career.

After a blinding start Hills was under challenge from Brad Neill (Matt Stone Racing FG) but a bump into the rear of the class leader turned Neill around at turn four. Hills just warded off Cup pole man Mark Tracey (FG) in the run to the flag.

“You can make up a lot of places off the start” Hills said as he went from 13th to seventh.

“I used up too much tyre in that race and was getting a little untidy defending in the end. We will go back and look at the data so it doesnt happen tomorrow.”

Just after there was also contact between Tony Auddino (Falcon BF) and Pollicina which turned the former around. Auddino was unable to resume as a wire had come off the starter.

A poor start meant Josh Fife (VE) was never in contention ultimately taking 12th as Neill recovered to be next ahead of Chris Smerdon (FG) who was on the comeback trail after firing off at turn one during the race.