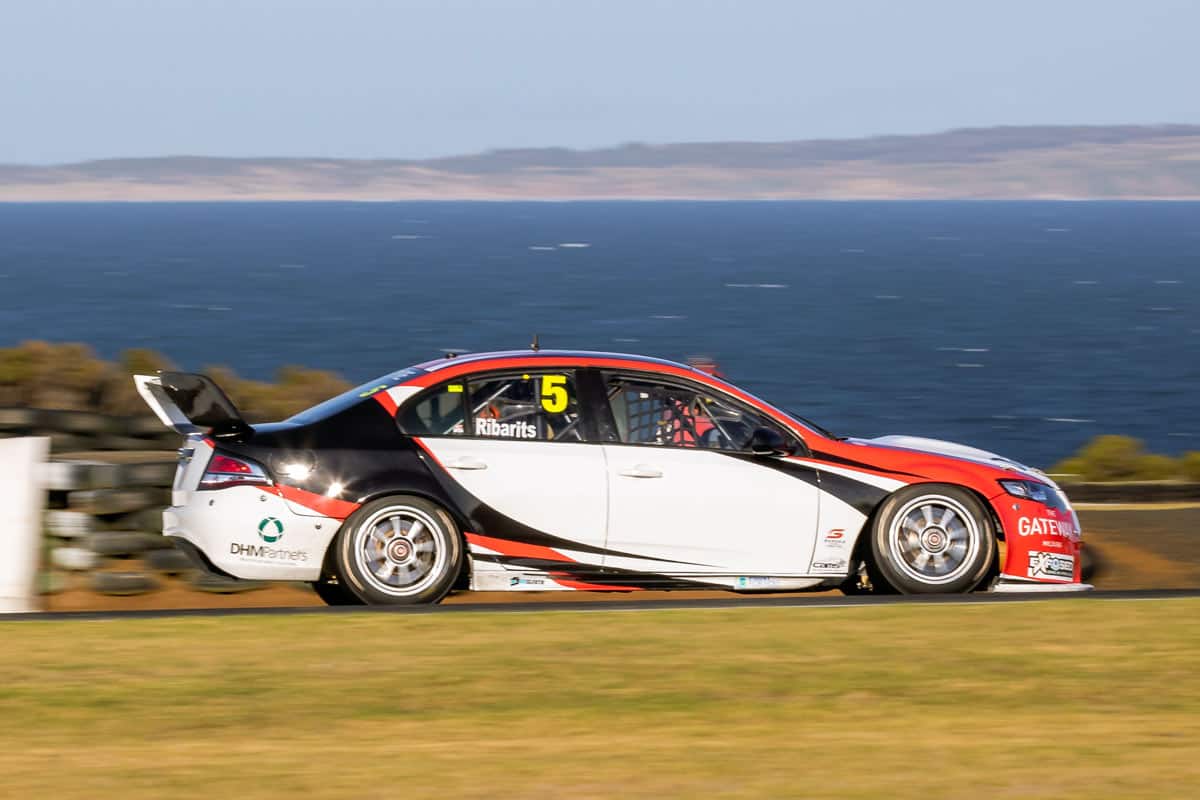 Driving for Matt White Motorsport in an ex-Ford Performance Racing Falcon FG Ribarits became the third different race winner for the weekend where his team mate Best was the overall round winner ahead of Ribarits with Feeney third.

It was a similar tale in Kumho Cup. There were three class winners across the two days of competition where Jim Pollicinas first in class in the final round in his Holden Commodore VE earned him the round win. Matt Stone Racing team mates Chris Smerdon and Brad Neill were second and third in their Falcon FGs.

Best was the race three leader from the outset ahead of Feeney and Ribarits Nic Carroll (MWM FG) and Matt Powers (Aussie Driver Search FG).

Feeney made a move for the lead on second lap with a move between turns eight and nine but it didnt get it done . . . and Ribarits snuck past. The next lap saw Ribarits get past Best as did Feeney.

â€œI had a good start but nowhere to go so I had to go the long way around to get through turn one said the race winner who was lucky to a point as he had a deflating tyre when he crossed the line.

â€œOnce in front it was a matter of putting the head down not look in the mirrors and just hit my markers.

â€œThe professionalism in the category has really progressed with lots of young guys coming in. I am sure they will quickly come to grips with the cars but for now I am happy to mix with them and take the class win said Pollicina.

Earlier in race two there was drama at the start with two cars crashing out before Best posted an all-the-way win.

Pole sitter and race one winner Feeney experienced a clutch failure off the line before contact with Mark Tracey (Image Racing Falcon BF) jettisoned the latter into the side of the fast-starting Garry Hills (Holden Commodore VE) putting both out.

In the meantime Best had made a brilliant start and after the safety car went on to a 1.7 second victory.

â€œI had no idea what had happen just seen yellows and the cars park when I came around. But no doubt the start was what made the difference Best said.

Team mates Ribarits and Carroll held second and third initially. Then Ribarits had a brake lock-up at turn four and not only allowed Carroll through but also Ojeda and shortly after Powers.

There was drama behind as McCorkindale and McLean duked it out for sixth and seventh and speared off at the Hayshed. Later they were again to clash this time at turn four.

Behind the MWM one-two Powers forged through to third ahead of Fife and Ojeda. Next was Ribarits who just held off the charging fightback by Feeney after he pitted to replace a damage wheel.

Then followed Smerdon who headed Jason Gomersal (FG) in a one-two for MSR in the Kumho Cup class. Third there went to Pollicina ahead of Neill.

â€œI stayed to the left at the start and avoided all the drama. Then it was just a matter of getting into the groove and staying with the fast guys Smerdon said.

Round two of the Kumho Tyre Super 3 Series takes place at Winton Raceway on May 24-26.